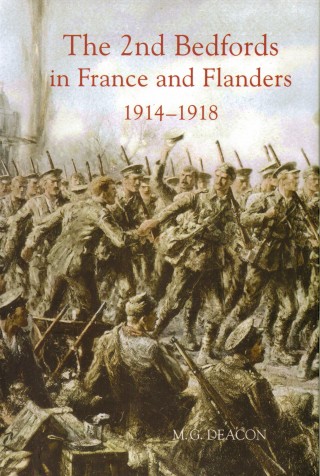 cover image: a chance meeting between the 1st and 2nd Battalions of the Bedfordshire Regiment in 1914
About this volume

A War Diary was kept by each unit while on active service during World War I.  Written by the adjutant, it was intended to be a record of the unit’s activities. Often terse, sometimes descriptive, the diary records troop movements to and from billets and trenches, weather conditions, the 1914 Christmas Day truce, shelling, attacks, battles and casualties.

The 2nd Bedfords took part in the First Battle of Ypres, Festuberts and Loos, and the Somme and Passchendaele. After a mauling during the German offensive of 1918 and having merged with the 7th Battalion, they ended the war with a successful career in 18th Division during the final British offensive from August to November 1918.

For anyone wishing to trace their steps, the book includes directions for three drives around the battlefields where the 2nd Bedfords saw action in northern France and southern Belgium.

Martin Deacon joined Bedfordshire County Council as a records management assistant in 1990, qualifying as an archivist in 1994. He joined Buckinghamshire Archives on a temporary contract in 2018 cataloguing the Buckinghamshire Archaeological Society collection.