A Bedfordshire bibliography: with some comments and biographical notes 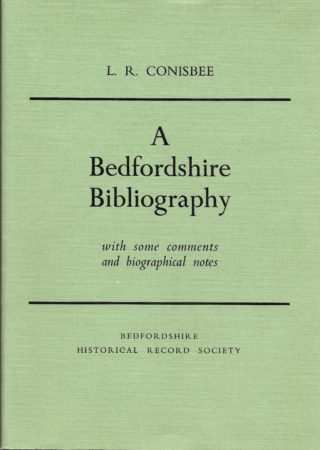 This bibliography and its three supplements were published over the period 1962-1978 and were aimed at providing lists of books, articles and newspaper extracts about Bedfordshire, published from the early years of printing in Britain to 1975 and held by libraries and archives in the county.  It includes sections on the administration of the county, religion, towns and villages, and biographies of Bedfordshire people.  Less expected, but of real value to historical research, are sections on the fauna, flora and weather of the county.

Despite its age and orientation to a pre-computer method of research, its detailed analytical content ensures that it remains a valuable source for items on Bedfordshire’s history.

You can download the bibliography and supplements by clicking on the links below:

Lewis Ralph Conisbee (1897-1991) was born in Bedford. He became a teacher, being English master at Hastings Grammar School and then moving back to Bedford Modern School. He wrote histories of both schools and many articles for the Bedfordshire Magazine. He was also a zoologist and contributed a supplement to Palmer’s Index generum mammalium (1904), which was published by the British Museum.

Alan Roy Threadgill (1931-2004) was Assistant County Librarian for Reference and Information in Bedfordshire before training for the ministry in the late 1970s. He held several benefices, mainly in Leicestershire, before retiring in 1995. He contributed articles to Herts Past and Present.

A Bedfordshire bibliography: with some comments and biographical notes, by L. R. Conisbee.  Luton, BHRS, 1962.  333p.