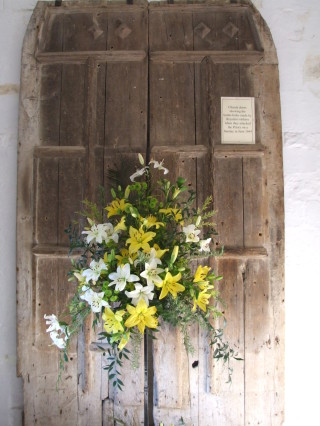 Bullet holes in Dunstable Priory church door made in 1644
photo: Ewart Tearle
About this volume

John Okey was an Anabaptist, London merchant, Parliamentary soldier, active in Parliamentarian politics, a regicide and an MP for Bedfordshire in 1658.  This book recounts his life against the backdrop of the Civil War and its aftermath.  It draws on Okey’s letters to give a vivid first hand account of military campaigns.

After he and other colonels published The Humble Petition of Several Colonels of the Army in 1654, for which he was disciplined and lost his commission, he retired to his estates in Bedfordshire.   He lived in the Round House at Brogborough during the 1650s and his estates included the honour of Ampthill, the manor of Millbrook, Brogborough Park and Lodge and lands in Leighton Buzzard.  During this period he was active in Bedfordshire affairs and as a Justice of the Peace.  He may have been involved in the establishment of John Bunyan’s first Baptist church in Bedford.

After the Restoration he fled abroad, but was betrayed, arrested and returned to England where he was tried and executed as a regicide.  Three contemporary accounts of Okey’s speech at his trial are printed side by side, providing an interesting commentary on different methods of reporting – official, friendly and a newspaper account.