You are here: Home>Publications>BHRS Publications 61-80, 1982-2001>The diary of a Bedfordshire squire

The diary of a Bedfordshire squire (John Thomas Brooks of Flitwick, 1794-1858) 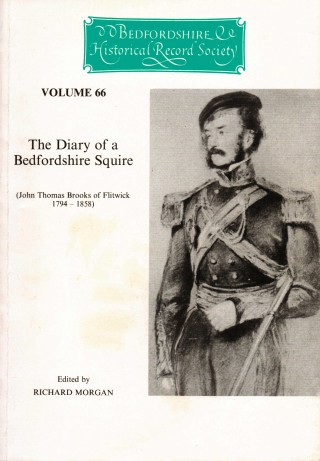 cover image: John Thomas Brooks in the uniform of the 14th Light Dragoons
About this volume

John Thomas Brooks led the life of a country squire, managing his estates, raising a family, serving the county as High Sheriff and on the Ampthill Board of Guardians and socialising with his peer group in the county.  These activities are all recorded in his diary together with his particular passion – gardening.

About the author(s)
Richard Morgan (1)

Richard Morgan has spent over 50 years in IT, being for many years Computer Officer to the two Houses of Parliament. He has written two other books on the Brooks family of Flitwick Manor: the Diary of an Indian Cavalry Officer and Life Runneth as the Brooks (Pagoda Tree Press, 2003 and 2011) (opens in a new window). A particular interest is the history of the British in India, and he has written British Ships in Indian Waters (Families in British India Society, 2012) (opens in a new window), describing the East India Company’s Maritime and Marine Services, as well as the independent ‘Country ships’.