You are here: Home>Publications>BHRS Publications 61-80, 1982-2001>Hundreds, Manors, Parishes and the Church

Hundreds, Manors, Parishes and the Church: a selection of early documents for Bedfordshire 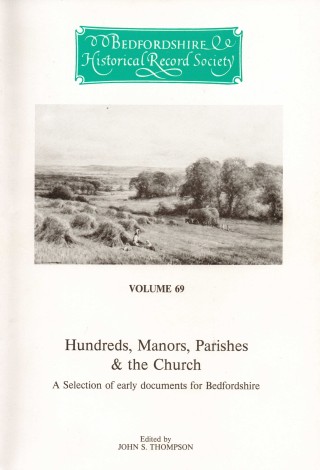 cover image: harvest scene by Sylvester Stannard
About this volume

This selection of early documents, transcribed and translated from Latin by John Thompson, includes the Hundred Rolls of 1274 and 1279 (taken from  the Record Commission’s editions of 1812 and 1818); account rolls for Higham Gobion and Streatley 1379-82; tithe and expenditure accounts for Blunham Rectory 1520-39; Turvey churchwardens’ accounts 1551-2; Bedfordshire archidiaconal visitations 1578; and Eggington manor court rolls 1297-1572.

Each section has an introduction by John Thompson or a local archivist: Patricia Bell, Nicholas H. Bennett, Chris Pickford and Kevin Ward.

Dr Nicholas Bennett FSA, FRHistS is General Editor of the Lincoln Record Society. Prior to retirement, he was Vice-Chancellor and Librarian of Lincoln Cathedral, where he was responsible for the historic collections of books and manuscripts.

John Thompson was an aeronautical engineer, latterly at RAE Thurleigh.  In retirement he was a volunteer in Bedfordshire County Record Office, transcribing and translating medieval, sixteenth and seventeenth century documents.

Kevin Ward is a qualified archivist and was an Assistant Director with Bedfordshire County Council from 2001-2009 with service responsibilities including Archives, Countryside Management, Rights of Way, Heritage and Environment, and Archaeology.  He is a registered Practising Member of the Academy of Experts (opens in a new window) who runs Paysage Associates, a specialist consultancy that engages in the interpretation, evaluation and critical analysis of historical documentation relating to the title, ownership and conveyancing of land and rights of land.