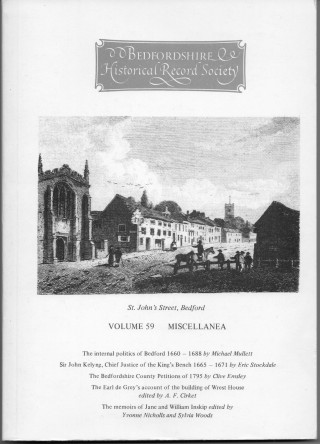 ‘The internal politics of Bedford 1660-1688’, by Michael Mullet [Describes the constitution of Bedford’s corporation and the effects of religion on the town’s politics in the reign of Charles II.  The article shows how John Bunyan drew on Bedford for the town in his book The Holy War.]

‘The Bedfordshire County Petitions of 1795’, by Clive Emsley  [An attack on George III prompted many counties to presented petitions congratulating him on his escape.  This article traces two conflicting Bedfordshire petitions.  The Duke of Bedford and Samuel Whitbread held meetings that also requested peace with France and the withdrawal of two Parliamentary bills against inciting hatred of the King and against assemblies.  A rival meeting congratulated the King on his escape, requested an honourable peace when the war was won and supported the two Parliamentary bills.]

‘The Earl de Grey’s account of the building of Wrest House’, edited by A. F. Cirket  [The account describes the garden, the house and its contents, room by room.  It is in the form of a letter from the Earl to his daughter, Anne Florence, Countess Cowper in April 1846.]

‘The memoirs of Jane and William Inskip’, edited by Yvonne Nicholls and Sylvia Woods  [These are memoirs of a mother (Jane) and son (William).  The Inskips were Methodists and Jane and her husband were farmers. Their son William lived in London and worked in a bank.]

Clive Emsley (1944-2020) was Emeritus Professor of History at the Open University, which he first joined as a lecturer in 1970. He also held posts at universities in Paris, Calgary (Canada), Griffith (Australia), and Christchurch (New Zealand) and the Australian National University in Canberra.  He was a leading authority on the history of crime and policing and was President of the International Association for the History of Crime and Criminal Justice. His books include The Great British Bobby: A history of British policing from the 18th century to the present.

Michael Mullett is Emeritus Professor of History at the University of Lancaster. His research interests are Reformation studies, Catholic and Nonconformist history, and early modern north-west regional history.

Yvonne Nicholls worked for Bedfordshire County Record Office in the 1970s, later moving away from the county.  She has contributed to the Bedfordshire Magazine and compiled the index to volumes 1-20 (1987).