The Publications of the Bedfordshire Historical Record Society, vol. 18 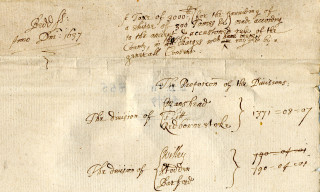 Ship money returns for 1637 from the Trevor-Wingfield collection (TW855)
photo: Bedfordshire Archives and Records Service
About this volume

‘The ship-money papers of Henry Chester and Sir Will. Boteler, 1637-1639’, edited by F. G. and Margaret Emmison. [Assessments, lists of arrears, and correspondence for Bedfordshire.]

‘Some recent accessions to the County Record Office’

Rev. Sir Henry L. L. Denny, Bt (1878-1953) was born and educated in Ireland. After ordination, he served in parishes in Ireland and then the south of England.  He was an army chaplain in the first and second World Wars. He was vice-chairman of the Church Emigration Society and a member of the Council of Empire Settlement, taking an active part in emigration work between 1920 and 1936. He was a genealogist and an expert on Anglo-Irish genealogy and the editor of The Genealogical Magazine 1925-1931. He wrote extensively on genealogical and antiquarian subjects.

F. G. Emmison (1907-1995) MBE, FSA, FRHistS began his career at Bedfordshire County Record Office under Dr Fowler, where he worked on the Bedfordshire Parish Registers series. He became Essex County Archivist in 1938.  He was prominent in archive management and staff  training.  He did much to publicise archives through his writings on Essex history, including Tudor secretary: Sir William Petre at court and home (1961).

Margaret Emmison (nee Langwill) (d. 1994) was, like her husband F. G. Emmison, an archivist. She was the first secretary of the Friends of Historic Essex, which supported Essex County Council in collecting and preserving the county’s records.