The Publications of the Bedfordshire Historical Record Society, vol. 2 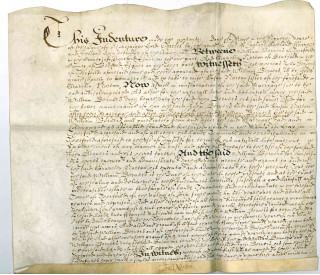 Marriage settlement of Elizabeth Norton of Stotfold in 1633, from the Trevor Wingfield collection (T48-31)
photo: Bedfordshire Archives and Records Service
About this volume

‘The Bedfordshire wills and administrations proved at Lambeth Palace and in the archdeaconry of Huntingdon’, by F. A. Page Turner  [parallel Latin transcriptions and English translations or abstracts of 23 wills proved between 1379 and 1627]

‘Records of Northill college, No. 2’, by C. Gore Chambers  [Latin transcription with English translation of a rental for Northill College.  It contains a description of the house occupied by the Master and fellows, the College’s property and tenants (temp. Henry VIII) and a survey of animals, crops and tithes of 1534-5.  A few field names occur. The first part of the article is in BHRS vol. 1.]

‘Bedfordshire charters in the Missenden cartulary’, by G. Herbert Fowler [A calendar and some transcriptions of charters relating to Flitton, Bedford and Harrold Priory (c1180) in the cartulary of the Augustinian Abbey of Missenden (Harl. MS 3688)]

‘The Browne family of Arlesey’, by F. A. Page Turner  [Documents and pedigrees elucidating this family and also its connection with the St John family]

‘Markets and fairs of Luton’, by William Austin   [The income from the market of the royal manor of Luton was 100 shillings in 1086. This article contains Latin transcriptions and English translations of medieval charters granting the manor of Luton and a discussion of the later sources about the market and fairs.]

‘Materies genealogica, no. 1’, by F. A. Page Turner  [Notes on Bedfordshire people from monuments and registers in other counties. No more published.]

‘A commutation of villan [sic] services’, by William Austin  [A Latin transcription with an English translation of a release from villein service ( c.1216-40) of named individuals and their heirs living in the manor of Luton in exchange for an increase in rent (BM Add Ch 19565)]

‘Records of knight service in Bedfordshire’, by G. Herbert Fowler  [A Latin transcription with English translation of records containing the service of Bedfordshire knights, 1244-1347].

C. Gore Chambers (c.1852-1913) was a founder member of BHRS.  He was an assistant master at Bedford Grammar School.  He wrote the ‘Political history’ chapter in VCH Bedford vol. 2 (1908) and the Bedfordshire volume in the series Cambridge County Geographies, published posthumously in 1917 (rep. CUP, 2012).

Miss A. V. Rickards was a Cambridge history graduate.  She wrote the sections on Biggleswade and Clifton hundreds and Luton in VCH Bedford volume 2.  Later publications are under her married name Mrs Hilary Jenkinson.

Dr John Edward Morris (?-1934) was a founder member of BHRS.  He was a teacher and wrote two history textbooks but his main interest was the early military history of England.  He wrote the introduction and made final corrections to C. Gore Chambers’ book on Bedfordshire (CUP, 1917)

This book has been digitised and is available on the Internet Archive site.  The Bedfordshire Historical Record Society did not commission nor undertake the work and is not responsible for the content nor quality of digitisation.