The Publications of the Bedfordshire Historical Record Society, vol. 1 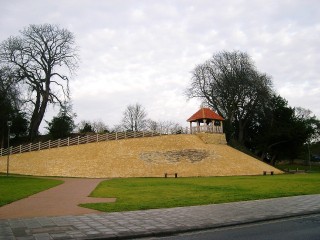 Castle mound, Bedford, in 2015
photo: Nicola Avery
About this volume

‘Clerical subsidies in the archdeaconry of Bedford, 1390-2, 1400-1’, by  J. E. Brown    [The Archdeaconry of Bedford had five deaneries: Clapham, Eaton (Socon), Shefford, Dunstable and Flitt. This is a transcription in Latin, with some English translations, and an introduction.]

‘Domesday notes’, by  G. Herbert Fowler  [This article discusses the location of Chainhalle manor in Colmworth; the Saxons Anschil and Ulmar and their successors in Bedfordshire; and the identification of the manor of Estone in Stodden hundred. Domesday notes II is in BHRS vol. 5.]

‘A lease of Caddington manor in 1299’, by C. Gore Chambers   [Latin transcription with English translation and an introduction.]

‘Early charters of the priory of Chicksand’, by G. Herbert Fowler  [There are abstracts of 21 charters (c.1150-1400) which were annexed to pleadings for exemption from payment of a clerical subsidy on the grounds of poverty in 1402-3.  The abstracts are in English, with some parallel texts in Latin and English, preceded by an introduction.]

‘The Bedford Eyre, 1202’, by G. Herbert Fowler [parallel Latin and English texts of the roll of the Justices in Eyre at Bedford in1202; with introduction.]

‘Records of Northill college, no. I’, by C. Gore Chambers  [An account was compiled in 1634 of the collegiate church of Northill which included a rental of free tenants of 1612.  This is an abstract of the documents with an introduction. Part 2 is in BHRS vol. 2.]

Rev. J. E. Brown who died in the 1920s was vicar of Studham from 1902 to 1913.  He wrote a history of Studham and was joint author of The Edwardian Inventories for Bedfordshire.

C. Gore Chambers (c.1852-1913) was a founder member of BHRS.  He was an assistant master at Bedford Grammar School.  He wrote the ‘Political history’ chapter in VCH Bedford vol. 2 (1908) and the Bedfordshire volume in the series Cambridge County Geographies, published posthumously in 1917 (rep. CUP, 2012).

The book has been digitised and is available on the Internet Archive site.  The Bedfordshire Historical Record Society did not commission nor undertake the work and is not responsible for the content nor quality of digitisation of this volume.