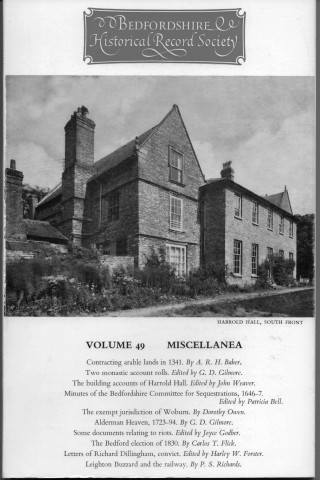 ‘Contracting arable lands in 1341’, by A. R. H. Baker [The retreat of settlements and abandonment of marginal land is examined through the returns of the 1341 tax of one ninth of the value of corn, wool and lambs for Bedfordshire (the Inquisitiones Nonarum).]

‘Two monastic account rolls’, edited by G. D. Gilmore [English translations of the cellarers’ rolls for the Augustinian houses of Newnham, 1519-20, and Harrold, 1401-2, with introductions.]

‘Minutes of the Bedfordshire Committee for Sequestrations, 1646-7’, edited by Patricia Bell [This is a transcription of the minutes of twenty-eight sessions of the committee held between May 1646 and May 1647, mainly written by Sir William Boteler.  It shows the administration of lands sequestered from royalists.]

‘The exempt jurisdiction of Woburn’, by Dorothy Owen [A transcriptions of six letters, written between 1711 and 1716, arguing for and against the Duke of Bedford’s claims to ecclesiastical jurisdiction in the parish of Woburn, with an introduction.]

‘Alderman Heaven, 1723-94’, by G. D. Gilmore [John Heaven was a Moravian and freeman, mayor then alderman of Bedford.  The article explains the controversies surrounding control of the corporation of Bedford at the time he was mayor in 1769-1770.]

‘Some documents relating to riots’, edited by Joyce Godber [Despite the lack of participation by Bedfordshire’s inhabitants in many of the national upheavals, rioting broke out in the county on a few occasions.  The documents transcribed here present letters and statements by participants or eye-witnesses to six riots.  The events were triggered by abuse of common rights at Blunham in1604, at Harrold in 1770 and at Maulden in 1796; by the Militia Act in 1757; and by distress at Stotfold in 1830 and at Ampthill in 1835.]

‘The Bedford election of 1830’, by Carlos T. Flick [The author describes this election as ‘one of the most bitterly fought and widely publicised elections in 19th century England’ because of a challenge to the Duke of Bedford’s interests by Captain Frederick Polhill.  The article recounts the manoeuvrings by both sides.]

‘Letters of Richard Dillingham, convict’, edited by Harley W. Foster (sic, ie Forster) [Richard Dillingham of Flitwick, aged 23, was convicted of housebreaking in 1831and transported to Australia for life.  The letters transcribed here were written between 1831 and 1839.]

‘Leighton Buzzard and the railway’, by P. S. Richards [Despite some local opposition to competition to the canal which was presented by the prospect of a railway, the line was built 1831-1838.  It helped Leighton Buzzard as a trading centre but not sufficiently to make it the pre-eminent town in south Bedfordshire.]

Dr A. R. H. Baker FBA is an historical geographer and former head of the Department of Geography at Cambridge University.  He has published widely on historical geography generally. His research is focused upon the changing society, economy, culture and landscape of France during the nineteenth century.

Dr Carlos T. Flick (1927-1993) taught in the Department of History at Mercer University. He published on social history and British Parliamentary reform in the nineteenth century.

Harley W. Forster writes on Australian nineteenth century history and has contributed to the Australian Dictionary of Biography.

Gaston Denis Gilmore (1911-1979) was a solicitor in a Bedford firm. In 1974 he became keeper of Bedford Borough muniments.

Joyce Godber (1906-1999) was Bedfordshire-born.  Following a history degree, she spent a few years teaching, then worked at Oxford University Press.  She was  assistant secretary at the Institute of Historical Research before becoming clerk of the records, then County Archivist of Bedfordshire (1946-68).  She was general editor of BHRS (1946-76) and an active member of the Society of Archivists and the British Records Association.  She planned the transfer of the record office to its new premises, which took place in 1969, the year in which her History of Bedfordshire was published.

Dorothy Owen MBE (nee Williamson) (1920-2002) was a medieval historian and archivist. She published extensively on medieval church and administrative history and produced editions of manuscripts. She worked in Lincolnshire Archives, Lambeth Palace archives, was Curator of Ecclesiastical Archives and then Keeper of the University Archives at Cambridge, where she also taught palaeography and diplomatic.  She was Editor and later President of Lincoln Record Society, and Chairman of the British Records Association.

Peter S. Richards has written extensively about the history of railways in Bedfordshire and neighbouring counties.