The Publications of the Bedfordshire Historical Record Society, vol. 38 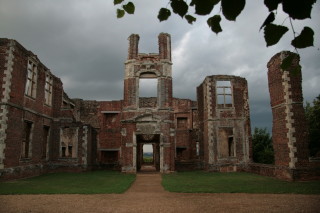 Ruins of Houghton House
Photo by Liam Quin. Originally uploaded to Wikipedia, and licensed under the Creative Commons Attribution 3.0 Unported license.
About this volume

‘A Bedford fragment and the burning of two Fraticelli at Avignon in 1354’, by D. W. Whitfield. [This transcription in Latin of an isolated folio gives the indictment of friars John de Castellione and Francis ab Arquata, with Friar John’s profession of faith. The folio is held by Bedfordshire Archives and Records Service (opens in a new window).]

‘John Lord Wenlock of Someries’, by J. S. Roskell.  [Sir John Wenlock who was a royal servant and ambassador for both Henry VI and Edward IV.  He held high office nationally and locally, was an MP several times and Speaker of the House of Commons 1455-6.  He was a soldier and served on both sides during the Wars of the Roses. He built up a large estate around Luton and elsewhere in Bedfordshire and Hertfordshire which he sold to Thomas Rotheram, Bishop of Lincoln.]

‘The Tower of London letter-book of Sir Lewis Dyve, 1646-47’, edited by H. G. Tibbutt. [Transcription of copies of letters from Dyve to Charles I and John Ashburnham.]

‘Inventory of furniture at Houghton House, c. 1726-28’, edited by Evelyn Curtis. [The house, near Ampthill, belonged to Thomas Bruce, 2nd Earl of Ailesbury, then in exile because of his support of James II.  At the time of the inventory, the house was probably unoccupied. The house was sold in 1738 to the Duke of Bedford.]

About the author(s)
Evelyn Curtis (1)

Evelyn Curtis worked for Bedfordshire County Records Office in the 1950s.  She has written several pamphlets in the Elstow Moot Hall leaflets series.

Dr J. S. Roskell FBA (1913-1998) was Professor of Medieval History at the University of Manchester. His publications focussed on the English medieval Parliament.

‘The two main contributions to this volume come from Professor J. S. Roskell and Mr H. G. Tibbutt. In tracing the career of John, Lord Wenlock of Someries, Professor Roskell shows what skill and experience can achieve with a difficult subject for biography. … Mr H. G. Tibbutt prints 47 letters written from the Tower of London by Sir Lewis Dyve in 1646-7, chiefly to Charles I. They are of some importance for an under-standing of the political manoeuvring of that year, and in particular they lend strong support to the view that during 1647 many army leaders were only too willing to come to terms with the king.’ – C. D. Ross Economic History Review,  vol. 12 (1959) p. 301.