The Publications of the Bedfordshire Historical Record Society, vol. 17 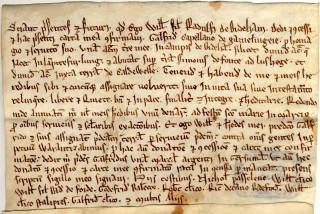 Deed from the Trevor- Wingfield collection (TW2)
photo: Bedfordshire Archives and Records Service
About this volume

Harrold Priory, founded c.1136 for nuns, was established as a house of the Abbey of Arrouaise in northern France.  Its history is outlined on Bedfordshire Archives and Records Service’s  Community Archives pages (opens in a new window).

The Priory’s cartulary was compiled c.1417 and is in the British Library.  Additional documents relating to the Priory are in the Trevor Wingfield collection which was donated to Bedfordshire County Record Office in 1932.

This book contains Latin transcriptions or abstracts in English of the cartulary;  transcriptions in Latin or Anglo-French of documents from the Trevor Wingfield collection at Bedfordshire Archives and Records Service (opens in a new window); and earlier charters from other sources.  There are detailed notes.