The Publications of the Bedfordshire Historical Record Society, vol. 20 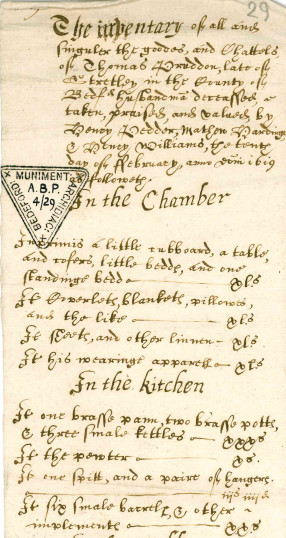 Inventory of Thomas Pruddon of Streatley1619 (ABP 4/29)
photo: Bedfordshire Archives and Records Service
About this volume

‘Jacobean household inventories,’ by F. G. Emmison.  [The editor claims that this is the first collection of inventories to be published with analytical notes.  A 50-page introduction and analysis of the inventories under the headings houses, furniture, domestic life, farmyard and valuations is followed by transcriptions of all 166 inventories for the period 1617 to 1619/20.  These are full text transcriptions with the original spelling, only lacking the names of appraisers.]

‘Recusancy and nonconformity in Bedfordshire, illustrated by select documents between 1622 and 1842,’ edited by W. M. Wigfield.   [The statistical analysis of the population of Bedfordshire parishes is based on the Liber Cleri of 1603 in Lincoln diocesan records (published in Lincoln Record Society  vol. 23, 1926), the hearth tax returns of 1671, the Compton census of 1676, and returns to episcopal visitations of 1717-1720.  Population tables are broken down into nonconformists and Roman Catholics.  The documents illustrating recusancy and nonconformity include extracts from assize and quarter session records, archdeacons’ visitations, Quaker records, returns of recusants in 1628 and 1679, manorial court records, presentment of dissenters in 1666 and administrative instructions (eg for the search for suitable parliamentary candidates in 1687).]

F. G. Emmison (1907-1995) MBE, FSA, FRHistS began his career at Bedfordshire County Record Office under Dr Fowler, where he worked on the Bedfordshire Parish Registers series. He became Essex County Archivist in 1938.  He was prominent in archive management and staff  training.  He did much to publicise archives through his writings on Essex history, including Tudor secretary: Sir William Petre at court and home (1961).

Walter MacDonald Wigfield (1899-1985?) was History Master at Bedford Modern School in the 1930s and a WEA teacher before moving to Godalming, then to the West Country.  He published on teaching history, religious education and about Monmouth’s rebellion.