You are here: Home>Publications>BHRS Publications 81-, 2002->The Shiny Seventh 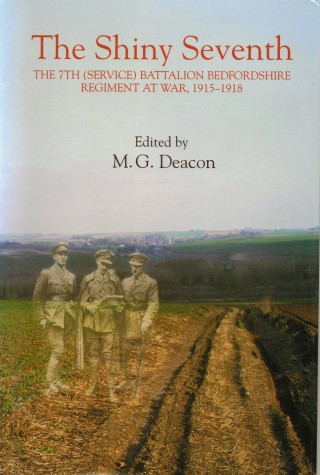 cover image: the battleground at Thiepal and three officers from the 7th Bedfords c.1916
About this volume

The Shiny Seventh was an ordinary Kitchener battalion, a body of men raised for the duration of the war, forming part of an ordinary county regiment. They saw extraordinary things and performed extraordinary actions as part of 18th (Eastern) Division, one of the most consistently successful British divisions on the Western Front.

This is their story as told by their successive adjutants in the official War Diary. It tells of the drudgery of the trenches, fatigues, entertainment and endless training, including that of the newly arrived Americans in 1918.

It also chronicles a rare success on the First Day of the Battle of the Somme, confusion at Arras, dash and gallantry at Ypres, endurance during the great retreat of March 1918 and a final ‘backs to the wall’ fight in front of Amiens which was instrumental in safeguarding the position of the entire British army in France, and thus the outcome of the war itself.

The personal diary of one of its subalterns, Henry Cartwright, is included as an appendix, courtesy of his great nephew, along with descriptions of the battlefields today and details of places visited and casualties suffered by this extraordinary, ordinary battalion.

Martin Deacon joined Bedfordshire County Council as a records management assistant in 1990, qualifying as an archivist in 1994. He joined Buckinghamshire Archives on a temporary contract in 2018 cataloguing the Buckinghamshire Archaeological Society collection.