You are here: Home>Publications>BHRS Publications 41-60, 1961-1981>Worthington George Smith and other studies

Worthington George Smith and other studies presented to Joyce Godber 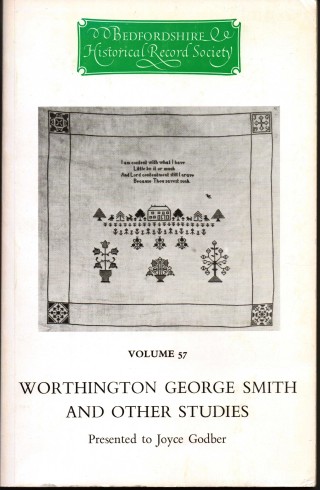 cover image: sampler made by Joyce Godber
About this volume

‘Bedfordshire chapelries: an essay in rural settlement history’, by Dorothy Owen [The existence of chapels, in addition to churches, in many parishes in pre-Reformation England is explained.  A list of rural parochial chapels in Bedfordshire between c.1123 and 1540 is given.]

‘Bedfordshire heraldry: a conspectus’, by F. W. KuhIicke  [Covering a broad sweep from the twelfth century to the 1950s, this article examines the relationship between the arms of lesser gentry and those borne by the lords from whom they held land.]

‘Middlemen in the Bedfordshire lace industry’, by Anne Buck [The work of lace making and the business of the lace buying middlemen are described, ranging over the period c.1600-1930.]

‘Joshua Symonds, an 18th-century Bedford dissenting minister’, by H. G. Tibbutt  [The family life of Joshua Symonds (1739-1788) is described as a prelude to an account of his work as pastor of the Old Meeting at Bedford from 1766.]

‘A Bedfordshire clergyman of the Reform era and his Bishop’, by Joan Varley [The Rev. Timothy Matthews and John Kaye, Bishop of Lincoln.]

‘Aspects of Anglo-Indian Bedford’, by Patricia Bell [The article examines the relationship between the high-quality, nearly-free Harpur Trust schools and the influx of Anglo-Indian service families to take advantage of these schools.  One consequence was the development of residential areas of Bedford to accommodate the incomers.]

‘The 1919 Peace riots in Luton’, by John Dony [The riot in which Luton Town Hall was burnt down was triggered by what servicemen viewed as inadequate provision by the Town Council for them to take part in the celebration to mark the end of World War I. The situation was exacerbated by the ex-servicemen’s dissatisfaction with their pensions and the lack of employment.]

This collection of essays was presented to Miss Joyce Godber (formerly County Archivist) on her retirement as general editor for the BHRS.

Dr John Dony MBE (1899-1991) has been described as ‘one of the country’s best known field botanists’.  He was a history teacher at Luton Grammar School, a local historian, botanist and honorary keeper of botany at Luton Museum (1935-1988).  He was the author of many books and articles including a book on the straw hat industry (based on his PhD thesis) and two standard works on the Flora of Bedfordshire (1953) and the Flora of Hertfordshire (1967).

Frederick William Kuhlicke, FSA (1893-1979) was senior modern languages master at Bedford Modern School, and an authority on Bedfordshire history, archaeology, heraldry and monumental brasses.  He became honorary curator of the Bedford Modern School Museum in 1933 and was instrumental in arranging its merger with Bedford Borough’s collections in 1962 to found the Bedford Museum (now merged with the Cecil Higgins Art Gallery to form The Higgins (opens in new window)).  He was its first director and the author of a guide to the Museum.  He was committed to the promotion of archaeology in Bedfordshire through the Bedfordshire Archaeological Council and his own work and writings.  He wrote extensively about material finds in Bedfordshire, heraldry and, with F G Emmison, several editions of the Historical Association’s English local history handlist.

Dorothy Owen MBE (nee Williamson) (1920-2002) was a medieval historian and archivist. She published extensively on medieval church and administrative history and produced editions of manuscripts. She worked in Lincolnshire Archives, Lambeth Palace archives, was Curator of Ecclesiastical Archives and then Keeper of the University Archives at Cambridge, where she also taught palaeography and diplomatic.  She was Editor and later President of Lincoln Record Society, and Chairman of the British Records Association.

Joan Varley FSA (1904-2002) amalgamated the records from several Lincolnshire councils and the Diocesan Record Office to form Lincolnshire Record Office and was the first county archivist (1948-1971). Later she worked with Kathleen Major to produce several volumes of the Survey of Lincoln.