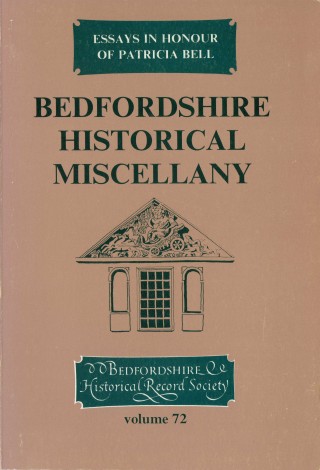 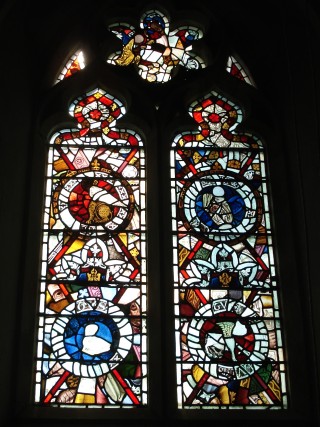 This collection of fifteen essays was presented to Patricia Bell on her retirement as BHRS Honorary General Editor.

‘Pre-1841 censuses and population listings in Bedfordshire’, by Colin Chapman

‘Archives and the visual arts: Potsgrove Church, its fourteenth century glazing and other fittings’, by Richard Marks

‘The geography of dissent in Bedfordshire’, by Edwin Welch

‘The case against Hugh Reeve, a seventeenth century recusant’, by Andrew Underwood

‘Some unpublished letters of the Revd Legh Richmond’, by Simon Houfe

‘My Choice: a poem written in 1751 by Mary Orlebar’, by James Collett-White

‘Activities of an estate agent in mid-eighteenth century England: Robert Butcher and the town of Bedford’, by Hermann Wellenreuther [Butcher was land agent for the Duke of Bedford.]

‘The Bedford medical community in the nineteenth century’, by Bernard Cashman

‘The Crescent, Bedford’, by Elizabeth Moser

About the author(s)
David Baker (2)

David Baker taught history at Bedford School, then lectured in history at Portsmouth Polytechnic from 1968 to 1972 before returning to Bedford to become Bedfordshire County Archaeologist in 1972 and County Conservation and Archaeology Officer in 1974.

David Bushby was a school teacher in Biggleswade. He obtained a second degree in the history of education and has published on education in Bedfordshire and other local history topics.

Bernard Cashman (1920-1996) was a consultant orthopaedic surgeon at Bedford General Hospital from 1961 to 1985 and held an honorary research post at the Kennedy Institute of Rheumatology, Oxford.  On his retirement, he was commissioned to write a history of the hospital and was guided in his research by Patricia Bell.  He also wrote a history of Bedford Asylum (described in one review as ‘a meticulously detailed history’).

James Collett-White is an archivist and has worked at the Isle of Wight Record Office (1970-1974), Bedfordshire Archives and Records Service (1975-2012) and has been Archivist to Sir Samuel Whitbread since 1997.  He has contributed to several BHRS volumes and was, for a short time, the Society’s general editor.  He has published articles to celebrate the hundredth anniversaries of Bedfordshire  Archives and Records Service and BHRS and researches, lectures and writes on history in Bedfordshire. He is working with Bob Ricketts and David Newman on another volume for BHRS on the Turner family of Milton Ernest.

Simon Houfe FSA is a journalist, author and Bedfordshire historian. He was on the staff of the Victoria and Albert Museum and is the author of The Dictionary of British Illustrators and Caricaturists and former editor of The Antique Collector.

Professor Richard Marks FSA is a member of the History of Art Department at Cambridge University and specialises in medieval art, on which he has published extensively. He was born in Bedfordshire and has a long-standing interest in the county’s history.

Margaret McGregor was an archivist in the Bedfordshire County Record Office for several years before returning to her native Bristol to work in the record office there.

Elizabeth Moser has been a JP and treasurer of the Bedford branch of the Historical Association.

Andrew Underwood (1934-2012) taught in Ampthill and then at Bedford Modern School from 1966 to 1989, where he was subsequently the school archivist.  He researched and wrote extensively on his native Ampthill.

Edwin Welch (1927-1998) was an archivist and worked in various parts of England from 1951 to 1971 and subsequently in Canada.  He was an expert and writer on Dissenting history.

Hermann Wellenreuther is Professor of Modern History at the University of Göttingen and the author of books and articles on eighteenth century political and religious history in Europe and North America.

Richard Wildman (1947-2018) was an authority on the history of Bedford and author of numerous local history books, including Bedford – A Pictorial History (1991) and Bedford’s Motoring Heritage, with Alan Crawley (2003).  He was a long-standing member of BHRS Council and was an officer of Bedford Architectural, Archaeological and Local History Society (opens in a new window) for well over forty years.