The Publications of the Bedfordshire Historical Record Society, vol. 5 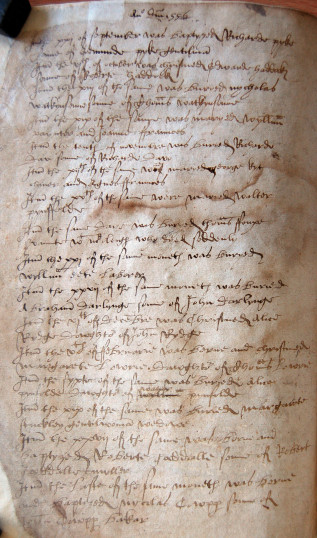 A page from the register of St Mary's, Bedford for 1556 (P81)
photo: Bedfordshire Archives and Records Service
About this volume

‘The assessment of knight service in Bedfordshire, no. 2,’ by John E. Morris  [For the barony of Beauchamp of Bedford.]

‘A late example of a deodand,’ by William Austin  [Transcription with notes of an entry in the Luton court rolls for 1758.  A deodand was an animal or object that contributed to a person’s death.  It, or its value, was forfeit to the Crown.  The procedure was abolished in 1846.]

‘The Hillersdens of Elstow,’ by F. A. Page-Turner  [A brief account with a pedigree of eight generations of the Hillersden family from Thomas, born c.1530, to Dennis Farrer Hillersden, died 1787.  The family lived at Chalgrave, Ampthill, Elstow and Cold Brayfield (Northamptonshire).]

‘Cutenho, Farley hospital, and Kurigge,’ by William Austin  [By piecing together references in property deeds from 1198, the location  of Cutenho (called Kidney by the nineteenth century) is established.  Additional details of property ownership south of Luton is filled in from an account of the establishment of Farley Hospital by a grant from Henry II to the brethren of the hospital of Santingfield in the Pas de Calais in 1156 and the descent of its property to 1855.  Similarly, the descent of land around Kurigge (now Cowridge End) identifies more of the early ownership and location of property originally on the outskirts of Luton.  Two maps reconstruct the area and the location of the properties.]

‘Munitions in 1224,’ by G. Herbert Fowler  [Translation into English of the Close Rolls 8 Henry III and Pipe Rolls 68 and 69 for Bedfordshire and Buckinghamshire which set out the equipment and other provisions  (some with costs) to be sent to Henry III at Bedford for the siege of Bedford Castle in 1224; with a brief introduction.]

‘Yttingaford and the tenth-century bounds of Chalgrave and Linslade,’ by Frederick G. Gurney [A discussion of the evidence for the bounds, with accompanying map.]

‘The paper register of St. Mary’s Church in Bedford, 1539-1558’, by the Rev. A. G. Kealey [sic]  [A transcription of the baptisms, marriages and burials in the original parish register.]

‘Calendar of inquisitions post mortem no. I,’ by G. Herbert Fowler [All the Bedfordshire inquisitions from the reign of Henry III, 1250-71 with notes.]

Frederick G. Gurney (1878-1947), from Eggington near Leighton Buzzard, was an archaeologist, local historian and antiquarian.  His extensive research notes are held by the Buckinghamshire Archaeological Society.

J. Hamson (1858-1930) was a journalist and assistant editor of the Bedfordshire Times and Independent and an active participant in Bedford civic activities.  In addition to local history articles, he was also a botanist, publishing An Account of the Flora of Bedfordshire (1906), and was joint author of the Botanical section of VCH Bedford vol. 1.

Rev. Arthur G. Kealy (1861-1927) was a Royal Navy Chaplain, 1887-1911, and subsequently a licensed preacher in the diocese of Ely, St Albans, Winchester and Salisbury and private chaplain to the Earl of Scarborough.  He frequently contributed to Notes and Queries and published Chaplains of the Royal Navy 1626-1903 (1905).

Dr John Edward Morris (?-1934) was a founder member of BHRS.  He was a teacher and wrote two history textbooks but his main interest was the early military history of England.  He wrote the introduction and made final corrections to C. Gore Chambers’ book on Bedfordshire (CUP, 1917)

This book has been digitised and is available on the Internet Archive site.  The Bedfordshire Historical Record Society did not commission nor undertake the work and is not responsible for the content nor quality of digitisation of this volume.