The Publications of the Bedfordshire Historical Record Society, vol. 3 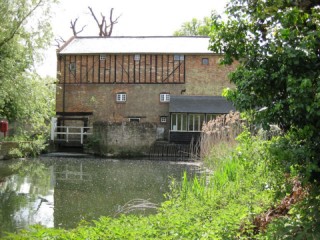 Bromham mill viewed across the mill pond
photo: Stuart Antrobus
About this volume

‘Roll of the justices in eyre at Bedford, 1227,’ by G. Herbert Fowler  [Introduction and English translation of the roll]

‘The Domesday water mills of Bedfordshire,’ by  W. Austin [Includes a map of their location]

‘The King’s larderer of Meppershall,’ by Mrs. Hilary Jenkinson

‘Recruiting of militia, 1798,’  [Transcription of the order from the Bedfordshire justices to the chief constable of Clifton hundred to draw up a list of the men aged 18 to 45 of Lower Stondon who were eligible for the militia]

Miss A. V. Rickards was a Cambridge history graduate.  She wrote the sections on Biggleswade and Clifton hundreds and Luton in VCH Bedford volume 2.  Later publications are under her married name Mrs Hilary Jenkinson.

The book has been digitised and is available on the Internet Archive site.  The Bedfordshire Historical Record Society did not commission nor undertake the work and is not responsible for the content nor quality of digitisation of this volume.